Titled after Terttu Uibopuu’s most recent series of photographs, E.S.E. (East South East) is the largest solo exhibition of the New York-based artist’s work to date. The exhibition features twenty-five photographs taken throughout the United States and Estonia, each revealing in its human, natural, or architectural subjects a quiet fortitude amidst the adversity of ongoing recovery from political occupation, natural disaster, or recession. Uibopuu was born in Soviet-occupied Estonia, spending her formative years during the period of the fall of the Soviet Union, which dissolved in 1991. She developed an interest in photography, and upon receiving a photography award from Philip Morris as a teen in 2001, she used the funds to purchase a one-way plane ticket to the United States—ultimately ending up in a small city in northern Illinois before moving to Chicago and finally relocating to New York.

While on a road trip to Florida from Illinois, Uibopuu was struck by the unfamiliar landscape of the Southern U.S. On a subsequent visit to Estonia, she began to notice parallels between her post-Soviet home country and the post-Katrina American South. This realization prompted her to revisit Louisiana and Florida and consequently develop E.S.E. (East South East) in 2014, aiming to blur the geographical lines between these two politically charged regions. Recently, she has expanded the range of her project to cover other areas of the U.S. she has a personal connection to, including, for example, a portrait of a working-class couple in the Great Recession-burdened city of Rockford, Illinois—an hour west of where she first lived in the U.S.—or an elderly immigrant couple stoically dancing at a Fourth of July party at a senior center she had worked at in the Bronx.

Anything that might distinguish the two countries represented in the series has faded far into the periphery of Uibopuu’s photographs. The artist explains, “As I feel at home both in America and in Estonia, I want to create my own photographic history, which combines these two disparate regions.” Uibopuu’s unusual life experiences and her own sense of fortitude grant her the unique ability to, as she states, “show the slow recovery from generational trauma of many contrasting places, and not how we are different, but perhaps, how we are all the same.”

On the surface, the images in the exhibition feature portraits that explore nuances of temperament, moments that illuminate routine life, and landscapes that reveal traces of human existence. Beneath this surface, however, lurks a conflict just out of view: a woman sunbathing in a green but craggy space as a reprieve from the cold Soviet-style block apartments just beyond the horizon; a flooded Estonian jail now used as a recreation spot; or a handsome young man exposing a tattoo of a bible verse on his bare chest in the Bayou of Louisiana. Uibopuu conveys these heightened moments of endurance, whether, as she states, “photographing a haunting nighttime image of a tree near the Mississippi delta that survived Hurricane Katrina a decade before, or directing a harsh flash upon the stoic face of a Russian boxer after losing a match.” Neither portraying stories of sympathy nor anecdotes of redemption, Uibopuu’s photographs capture the intricacies of people’s resilience that would otherwise be lost in the day’s routine.

A publication is forthcoming, with an essay by Estonian art historian Liisa Kaljula and a foreword by exhibition curator Jason Judd. Terttu Uibopuu: E.S.E. (East South East) will travel to the Rockford Art Museum in Rockford, Illinois, where it will be on view from July 27 through November 11, 2018.

Terttu Uibopuu (b. 1984) is an Estonian photographer currently living and working in New York City. She had a solo exhibition at Soloway gallery in New York City in 2017 and was featured in Vice magazine in 2016. Uibopuu’s work has also been exhibited at Bronx Museum of the Arts, Bronx, New York; Nicole Klagsbrun, New York; Schneider Gallery, Chicago; Co-Prosperity Sphere, Chicago; and Society of Korean Photography, Seoul, Korea. She has received the Alice Kimball English Traveling Fellowship at Yale University and The Tierney Fellowship in New York City. She has also participated in panels and lectures in the U.S. and Estonia including the Yale University School of Art; City College, New York; Estonian Art Academy, Tallinn, Estonia; Massachusetts College of Art and Design, Boston, Massachusetts; Estonian Art Academy (Eesti Kunstiakadeemia), Tallinn, Estonia, among others. Uibopuu was a resident at the Artist in the Marketplace (AIM) program, Bronx Museum of the Arts, Bronx, New York, and is currently a resident in the Lower Manhattan Cultural Council Workspace Residency. Uibopuu holds a Bachelor of Fine Arts in Photography from Columbia College Chicago, and a Master of Fine Arts in Photography from Yale University School of Art. She is currently an Assistant Professor of Art at Borough of Manhattan Community College. 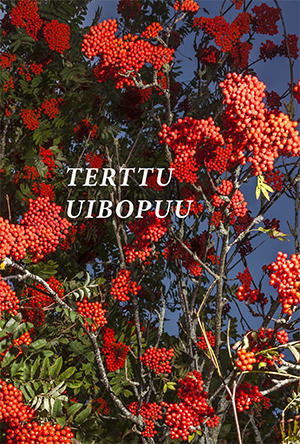 This 72-page catalogue includes an essay by Estonian art historian Liisa Kaljula and a foreword by exhibition curator Jason Judd.

Pantagraph: Looking Between the Lines of Life