Wonsook Kim: Lines of Enchantment is the artist’s first solo exhibition at Illinois State University since her MFA degree project in 1976 entitled Normal Expe rience. In the intervening decades, Wonsook Kim has developed an international following with more than 60 solo exhibitions throughout the U.S., Europe, and Asia.

Whether articulating a fold in a garment, a frond in a forest, or a fork in a path, Wonsook Kim’s masterful drawing, as fluid and immediate as calligraphy, is at the heart of each of her compositions. Her work is manifest in recurrent archetypes: a shelter, a small craft on the water, a figure crossing a fallen tree trunk or a bridge—often seen in various combinations and states of transformation. These universal symbols of life’s journey and its attendant longing also reflect Kim’s experience as a Korean transplanted to the Midwest to attend art school, then to New York to live as an artist, and since that time shuttling between these three locations.

This exhibition presents the artist’s newest work together with her earliest. A selection of prints and drawings created at Illinois State University from 1973-76 accompanies three series completed over the past eight years: the alluring “Shadow Drawings” (2011-15), cast bronze outlines of figures appearing as though drawn on the wall with a cast shadow; off-white paintings (2012-14) whose images are inscribed into the blue underpainting with the butt end of the brush; and the “Forest Scenes” (2008-14) paintings in which people, animals, and angels commune in magical woods and waters illuminated by globes of light.

Lines of Enchantment coincides with the publication of Wonsook Kim: Innocence, covering work made during her student years from 1972-76. Several works on paper in the exhibition appear among the 112 reproductions in this elegant book, which also includes a foreword by the artist and an afterword by Barry Blinderman, curator of the exhibition.

The artist will sign books at the opening reception and after her lecture.

Wonsook Kim was born in Busan, Korea, in 1953 and arrived in the U.S. in 1972 to begin a Bachelor of Fine Arts degree, and later a Master of Fine Arts degree, at Illinois State University. She moved to New York City in 1976, and in 1980-81, was included in prominent exhibitions of new figurative art such as Episodes, at Grace Borgenicht Gallery, and Illustration and Allegory , at Brooke Alexander, Inc., where she also had her first solo exhibition in the U.S in 1982. She has since had one-person exhibitions in New York City, Philadelphia, San Francisco, Chicago, Los Angeles, Hamburg, Paris, Seoul, Bologna, Sofia, Sao Paulo, and Tokyo, among other cities. Public collections include the Museum of Modern Art, NYC; Brooklyn Museum of Art; Ringling Museum of Art, Sarasota, Florida; University Galleries of Illinois State University, Normal; National Museum of Women In the Arts, Washington, D.C.; National Museum of Contemporary Art, Seoul; Watari Museum of Contemporary Art, Tokyo; and the Vatican Collection, Vatican City. The artist divides her time between Bloomington, Indiana, and Manhattan, with frequent travels to Seoul. 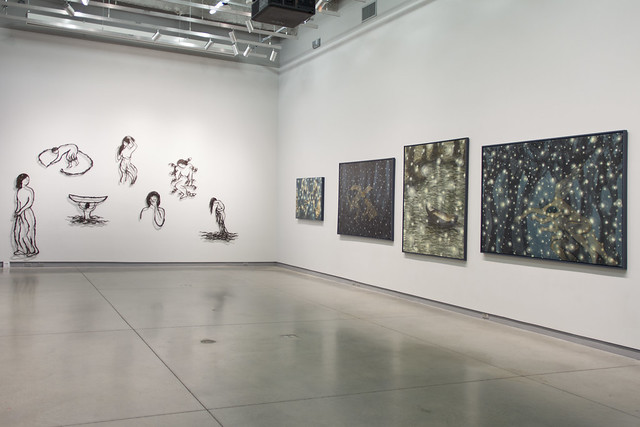