Nine Trips Around the Sun is the largest and most comprehensive presentation of Carrie Schneider's photographs and films to date. Spanning the years 2006 through 2015, the 59 works offer a survey of the artist's self-described documents of something performed for the camera and demonstrate the range of lens-based processes she has employed. The exhibition includes works from her Derelict Self, Figure-Ground, Burning House, and Reading Women series, and will premiere a 16mm film and photographs from her recent Moon Drawings series and silver gelatin prints from her new Summer Drawings project. Schneider's Dance Response videos, made in collaboration with choreographer/dancer Kyle Abraham, will also be on view.

The earliest works in the exhibition are Schneider's Derelict Self photographs (2006-2007), for which the artist and her brother enacted mundane moments together bathing, napping, or wrestling—that, in childhood, evince the intimacy of sibling relationships, but, in adulthood, point to complex emotional dynamics, including the navigation of simultaneous desires for closeness and separation. Schneider created her psychologically charged Figure-Ground works (2008), which merge the artist's body and the stark natural landscape, while completing a Fulbright Fellowship in Finland, the country where her grandmother was born.

For her Burning House series (2010-2013), Schneider traveled repeatedly to northern Wisconsin, each time building a small wooden house, rowing or dragging it to a tiny island, setting it on fire, and photographing and filming it. The endurance of her action is mirrored in the fortitude of the house, which, although perpetually engulfed in flames, never seems to burn down, even as the times of day and seasons shift. For Reading Women (2011-2014), Schneider likewise set up scenarios to concurrently photograph and film, in this case repairing to the domestic interiors of her creative cohort to record 100 individual female artists, curators, writers, and musicians as they each read a book of their choosing by a female author. Schneider relates that during the course of their reading, the sitter loses awareness of the camera and any semblance of a pose, forgetting her cultural performance.

Schneider traveled to North Carolina's rural mountains and spent one month, the duration of an entire moon cycle, photographing and filming the moon for her Moon Drawings (2014-2015). She used a medium-format 6x7 camera and exposed the same twenty rolls of film on a nightly basis—sometimes rewinding and shooting again multiple times in one night—resulting in 300 unique silver gelatin prints and a 16mm film. Schneider's Summer Drawings (2015) are also unique silver gelatin prints, but their mysterious abstractions of figures, plants, and architecture were made by directly exposing photographic paper in the camera.

University Galleries will publish Schneider's first monograph in 2016. The 84-page book will feature essays by Julie Rodrigues Widholm (Director of the DePaul Art Museum, Chicago) and Joanna Szupinska-Myers (Curator of Exhibitions at the California Museum of Photography, University of California Riverside ARTSblock) and a conversation between Schneider and exhibition curator Kendra Paitz (Senior Curator at University Galleries).

The exhibition and publication have been made possible by a grant from The Andy Warhol Foundation for the Visual Arts. Programs at University Galleries are supported in part by a grant from the Illinois Arts Council Agency.

High school classes are invited to participate in a free field trip program, which will include a curator-led exhibition tour and a photography-based workshop led by Kayla Heuneberg, a graduate student in Illinois State University's Art Education Program. Exhibition tours are available November 2 through December 18, and workshops are available on Friday, November 13, at 10 a.m. and 1 p.m., and Friday, December 4, at 10 a.m. and 1 p.m. Please register by calling 309.438.8191 or sending an email to gallery@IllinoisState.edu.

Educators can earn recertification points by participating in a free workshop on Tuesday, November 3, from 5:30 p.m. - 7:30 p.m. The workshop will include a curator-led exhibition tour and discussion, activities, and lesson plans led by Judith Briggs (Associate Professor in Art Education) and graduate students in the Art Education Program. Please register by calling 309.438.8191 or sending an email to gallery@IllinoisState.edu.

Schneider's Reading Women film will also be on view at Illinois State University's Milner Library (on the third floor) from November 3 through December 20.

Please contact University Galleries at 309.438.5487 or gallery@IllinoisState.edu to schedule a free curator-led tour for your class or community group.

Schneider's work has been exhibited in solo presentations at the Museum of Contemporary Art, Chicago; Finnish Museum of Photography, Helsinki; Mattress Factory, Pittsburgh; California Museum of Photography, University of California Riverside ARTSblock; and Trondheim Academy of Fine Art, Norway; and in group exhibitions at the School of the International Center of Photography, New York; Galer a Alberto Sendr's, Buenos Aires; and Kunsthal Charlottenborg, Copenhagen. She has received awards from Creative Capital, the Jerome Foundation, the Joan Mitchell Foundation, and the Illinois Arts Council Agency, and was a Fulbright Fellow at Kuvataideakatemia (Academy of Fine Arts), Helsinki, and a Sumner Rulon-Miller Fellow at Skowhegan School of Painting and Sculpture. Schneider received her BFA from Carnegie Mellon University and her MFA from The School of the Art Institute of Chicago, and she is currently participating in the Whitney Indepedent Study Program at the Whitney Museum of American Art. She lives in Brooklyn and is represented by Monique Meloche Gallery, Chicago. 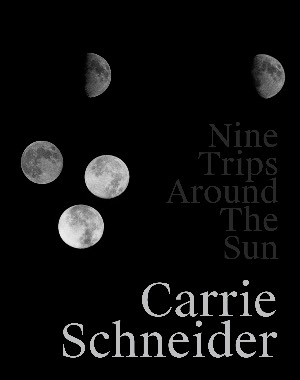