The House of Seven Gables

Inspired by Nathaniel Hawthorne's 1851 novel of the same name,  The House of the Seven Gables features 22 contemporary artists who explore themes of haunting, portraiture and the domestic uncanny. The titular mansion in the book embodies generations of violence, superstition, melancholy, repressed memories, and ancestral guilt for the Pyncheon family. Serving as a repository of memory and atonement, the house itself functions as a portrait of the family's collective trauma. Written concurrently with the rise of daguerreotype photography—and notably featuring an ever-shifting oil portrait, a fetishized miniature pencil drawing, and daguerreotypes made by a central character—the modes of representation Hawthorne references become increasingly more modern as the novel progresses to reflect the passage of generations.

Consistent with motifs in Hawthorne's novel, the 27 works included in the exhibition reflect variously on the passage of time, the supernatural, and aspects of mystery and foreboding. One such work is Dario Robleto’s  Diary of a Resurrectionist (I’ll be waiting for you), for which the artist fastidiously constructed photo albums from a bewitching amalgam of materials—including cast and carved bone dust, fragments of soldiers’ personal mirrors, and melted vinyl from Jackie Wilson's album “Lonely Teardrops”—in order to encase antique “spirit” photographs. The work thoughtfully comments on the precious nature of family photographs as well as nineteen century ideas linking photographic technology to magic.

The horror film functions as an updated version of the Gothic novel in Sue de Beer’s video installation, The Quickening. The historical and supernatural references that she draws upon—including excerpts from Jonathan Edwards’ 1741 sermon “Sinners in the Hands of an Angry God,” photographs of the House of the Seven Gables in Salem, Massachusetts, and imagery of murdered female protagonists hanging from nooses—evoke the spiritual tension and resulting violence that are foundational to Hawthorne’s novel.

While de Beer incorporated found photographs of the house, Corinne Botz visited Salem to create her newly commissioned works, including a photograph of an ink stain on the desk at which Hawthorne wrote the book. Her closely cropped forensic investigation resonates with the celebrated author’s physical trace as well as a notion of stained histories.

Hawthorne’s guilt about the role his ancestor, Judge Hathorne, played in the Salem Witch Trials seeps through in the book’s references to mesmerism, curses, an unjust hanging, and a corrupt judge. Bob Jones’ concrete sculpture, Father’s Headdress, explores the heavy burden of ancestral acts, while its conical black shape recalls the vernacular iconography of witchcraft.

University Galleries has collaborated with faculty and students in the School of Art, the School of Theatre and Dance, the English Department, and Milner Library to develop programming that encourages further dialogue not only about Hawthorne’s novel, but also a visual approach to interpreting literature.

The exhibition was curated by Kendra Paitz, Curator of Exhibitions at University Galleries.

The exhibition and catalogue have been made possible by a grant from The Andy Warhol Foundation for the Visual Arts. Additional funding for the catalogue was provided by the Elizabeth Firestone Graham Foundation. Programs at University Galleries are supported in part by a grant from the Illinois Arts Council, a state agency

Teacher Workshop with Andrew Huot: The Art of Bookmaking
February 25 at 5:00 p.m.

Lecture on Photography by Melissa Johnson
April 1 at 4:00 p.m. (at Milner Library)

A moment that flits away: Daguerrean vision in The House of the Seven Gables
Curated by Melissa Johnson, with assistance from Marissa Webb and Samantha Simpson 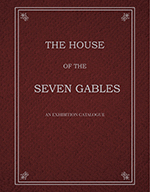 The House of the Seven Gables, An Exhibition Catalogue