Mark Forth and David Hodges: Fractured Tales from the Heartland

Fractured Tales from the Heartland: Paintings by Mark Forth and David Hodges includes 40 paintings by the two artists completed between 1987 and 1992. Hodges, a Rockford native who lives in Chicago, creates tiny oils on panel which keyhole visions of awkward rituals (camping, parental sermonizing, medical exams) that cling persistently to the banks of memory. He encases these somewhat sinister “miniatures” in disproportionate large frames, often displayed in proximity to real objects such as tables or a painted drinking glass. Forth, a native and current resident of Bloomington, paints "fictitious nocturnes" in which mysterious domestic scenes set in the dark interiors of midwestern buildings are transformed by candlelight or moonlight into “shadowy theatres of the unconscious.” Although each artist has pursued a highly individualized painting style, both reference art ranging from Caravaggio to 1930s-40s realists.

"Viewers of Mark Forth's paintings enter a realm of stillness and shadow, where antique furnishings, austere architecture and eerie lighting become interpreters for mute figures that stand, crouch, or recline impassively. Like somnambulists, these single or paired characters perform their quotidian rituals: boiling or pouring water, turning on lights, reading, working with tools, and especially looking. No reveries illuminate the glances of the oddly rendered people-their solitude remains inviolate. Nor is there promise of a clarifying vision in the dark landscape beyond the windows and doors of their chambers. The only possible clues as to the mysteries locked within these sparsely furnished rooms lie in meticulously articulated and curiously situated household objects: teacups lined up on a bedpost, tinted glass bottles on shelves and bureaus, a cluster of antique alarm clocks on a windowsill, a painted porcelain lamp lying on the floor...

...Looking at a David Hodges painting is like peering through the wrong end of a telescope at a distant place you have seen before and are not quite sure you would ever want to visit again. Yet you do, repeatedly, seeking a glimpse through tangled threads of memory at the perfect isolation one experiences during moments of existential realization. Hodges' tiny paintings invariably allude to the dreamlike links. seepages and distortions that occur when we try to recall the past in speech, in written word or in images. Within his spatially and psychologically compressed compositions we find bizarre characters invoked in the most common of' scenarios, relatively normal-looking folk engaged in absurd activity, or, as in the most insidious nightmare, a detached parade of somewhat believable events building gradually toward an unaccountable sense of anxiety."

—Barry Blinderman, excerpted from the Fractured Tales from the Heartland catalogue. 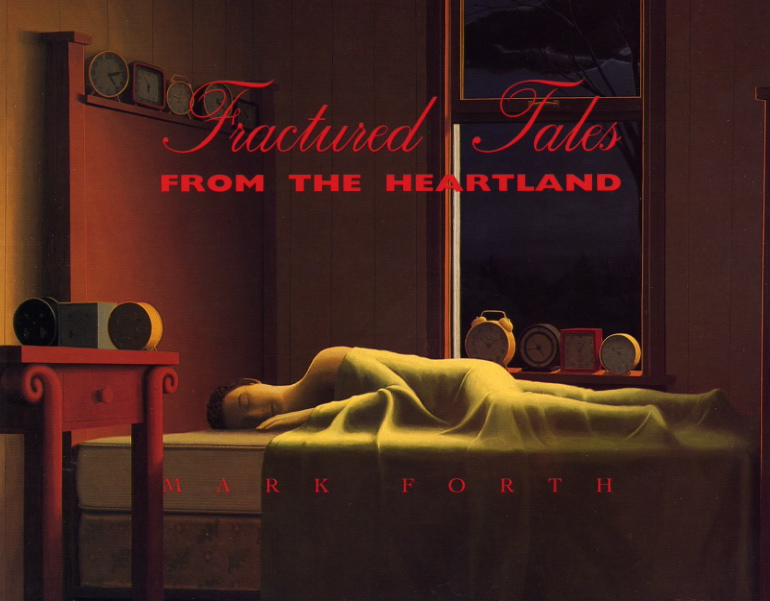